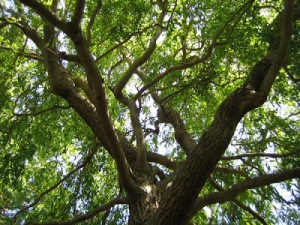 Imagine you are climbing a tree. (Not my thing, but in the imagination one can do all kinds of things.) You go some way up and then decide to go out on a limb, as the saying goes. You make your way, shimmying out from the trunk of the tree, choosing your direction as smaller branches divide. The limb grows thinner and thinner. At some point the limb begins to bow under your weight, but you keep going. Finally you hear the dreaded sound, a small, yet sharp “crack”…  Now, choose your own adventure. Do you go further out, or further in? Do you keep going out on that limb, or do you backtrack and draw nearer to the trunk?

This little thought experiment captures where I am these days concerning the future of the Church and, especially, of my denomination, and my own future in it.

I have begun a new sermon series on the book of Daniel. The inspiration for delving into this challenging book struck me during worship the Sunday after the Supreme Court legalized same-sex marriage in the nation. We were worshiping at Manteo Baptist Church, in Manteo, NC, a warm and welcoming congregation. During the service the pastor shared a story. He related how he had been headed to the hospital to visit a congregant when, while sitting at a stoplight which had just turned green, the car behind him honked impatiently. Suddenly he was lost. He still knew where he was, but he forgot where he was going, and momentarily didn’t know whether to turn or go straight. Everything was the same, yet it was all suddenly unfamiliar. He said that was how he was feeling in light of the Supreme Court decision. And that is how I am feeling as well. He put it perfectly.

I guess what troubles me is the sense of a shift in the place of the church in our society. Earlier this year, the much discussed Pew study pointed to an increase in those who say they have no religious preference and a corresponding decrease in the number of people identifying as Christians. The legal struggles over same-sex marriage have often been portrayed, no doubt simplistically, as a battle against Christian bigotry. While pinning down national morals is a tricky business, we seem to have passed a tipping point in the acceptance of the moral authority of the Bible and the Christian Church, both outside of and within the Church. In my denomination, we have not rejected the authority of the Bible, but we have steadily broadened the range of acceptable interpretations and likewise permitted more and more in our life together.

The question is, though, when has a church so broadened the range of acceptable interpretations of Scripture and practice that there is no longer anything meaningfully binding the church together? To put it a different way, how many parts of the car do you need to replace until it is no longer the same car, but rather a new one?

One way of responding to the broadening is to reject it. We can refuse to accept other interpretations as heretical and seek to push out those who ascribe to such teachings. Lacking ability to do that, we can break off and join a different denomination or form our own. In my denomination many have done the latter, the former not being possible.

But there is another way. Instead of going further out, we can move further in. To leave the denomination or to form a new one, all in the cause of doctrinal or moral purity, is moving further out on that cracking limb, adding one more branch, a smaller and smaller one, to the tree of the Christian Church. How long before the limb simply cracks off and tumbles to the ground? Instead of dividing, we need to move back toward the trunk, back toward the main stream of the Christian Tradition. We need to be willing to stand less on our doctrinal and ecclesiastical distinctives and more on the central truths of our faith, a faith we share with over two billion people around the world.

I am not advocating leaving my denomination, but rather, while remaining in the branch of the Faith I am in, paying more mind to the main sweep of the Christian Faith, not being so focused on what makes my branch different than everyone else’s, but on what unites the whole tree.

This is not how I was raised or schooled. I was brought up in my church, seminary, and peer group to be a good Protestant, the word “protest” being operative. I am suggesting we become more “catholic”, noting the small “c”, in our work and ministry as the Church, noting the big “C”.

I am still thinking all this through. One thing I know for sure. What we as the Church have been doing needs to change. And the answer doesn’t lie in doing some new thing, but in returning to a different past.